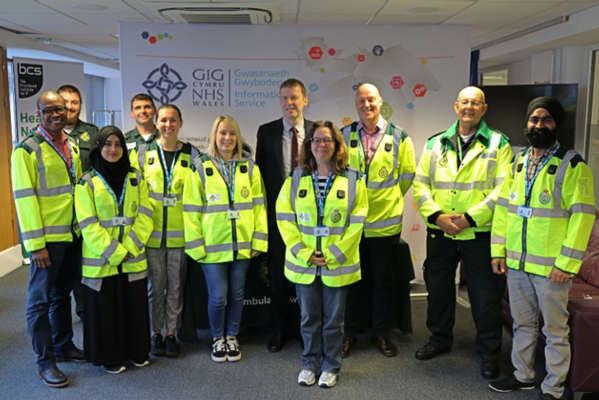 Training for Community First Responders held in an NWIS office earlier this year has proved invaluable, after one of the course attendees saved the life of a young man in Cardiff.

The Welsh Ambulance Services NHS Trust completed the training of eight new Community First Responders (CFR) as part of an initiative for organisations to train staff with life-saving skills and support the wider NHS workforce.

Neil Kitching, who works in NWIS Organisational Development was one of the group trained as a First Responder and had his skills put to the test when an alert popped up on his phone.

The message read: “Patient collapsed. AED on scene. 357m away. Can you assist?”

Neil immediately made his way there, arriving before the ambulance. He found a young man flat on his back with eyes rolled back in his head and making intermittent gasping noises.  It was quickly established that the man had received one shock from the automated external defibrillator (AED), made a movement, started gasping and then CPR was stopped. Neil detected abnormal breathing and knew that that CPR must be started again immediately.

After 20-30 seconds of compressions, the patient rolled onto his side showing signs of life and recovery. This is called a ROSC (Return of Spontaneous Circulation). Neil was able to keep the man stable until the paramedic crew and Rapid Response Vehicle (RRV) arrived a few minutes later.

After talking it through with his First Responder trainer, Neil discovered that not only had he followed the correct procedure for the situation, but he had also helped to save someone’s life who had suffered a cardiac arrest.

Neil said: “For the defibrillator to allow a shock to be delivered, it must detect that the patient is in ‘VF’ (Ventricular fibrillation), which is followed by death in the absence of treatment. Fewer than 10% of people make a recovery from cardiac arrest, so to achieve a ROSC on my first call out as a responder was awesome!”

Neil’s life-saving actions that day are a testament to his courage, determination and focus as a Community First Responder.

The First Responders are on a rota covering core working office hours (9 am until 5 pm). They can be called to incidents within 1,000 metres of their office and are trained to deal with 702 different accident codes including cardiac arrests, strokes, allergic reactions or chest pains.